I don’t even know where to begin. That’s how incredible this weekend has been, Perhaps I’ll start with the sentiment I felt the entire weekend. I kept saying, “I feel like this is a dream, I keep feeling the need to pinch myself to make sure it is real!”
Life is a series of events, decisions, and choices. Some occur daily and have little effect on our overall life. While others have the chance to completely change our future! Kristoffer kept referring to it as a series of coincidence that brought us all together and made us become friends. I like to think of it as a mix of coincidences and choices that we each made that alined to bring us all together!

For each of us individually it began with our choice to study abroad and then to do so at IAU in Aix-en-Provence! Now there were many different factors and choices that lead us each to the point of studying abroad and then choosing to do so in Aix but each of our decisions to do so set off the chain of events that began notre histoire (our history).

Deciding to study abroad was a huge deal for me. I am so thankful to all the people in my life who supported my decision to study abroad and encouraged me to go for it even when I was scared of going off on my own. As the weeks before I left began to disappear the fear mounted. Everyone asked, “Are you so excited to be going to France,” I of course replied, “yes” but I was thinking ‘No! I’m terrified!’ I was nervous about leaving my family for so long to go live in a foreign country who’s language I barely knew. But it was too late I was going…and thank goodness I went! 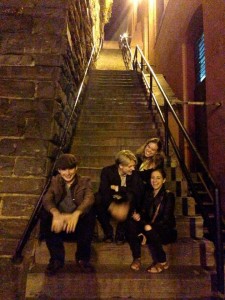 There were certainly ups and downs throughout my stay in France but I wouldn’t change any of it for the world! I learned so much about myself, France, and the world we live in! The best part of study abroad which I never expected was the amazing friends I made and have kept! I met Caya my first week in Aix during the early start program. After a week together we were as thick as thieves and did everything together! Then in the middle of the semester our group grew thanks to an unexpected trip to Paris! Post-Paris Aix consisted of Friday night dinners and lots of fun with Kristoffer and Scott! It was a group brought together by a mix of chance and choice and who will continue to meet up and celebrate the amazing trip that began our friendship! Je vous aime! Aix-O-Aix-O Toujour! 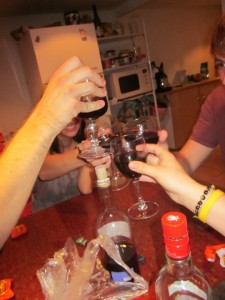